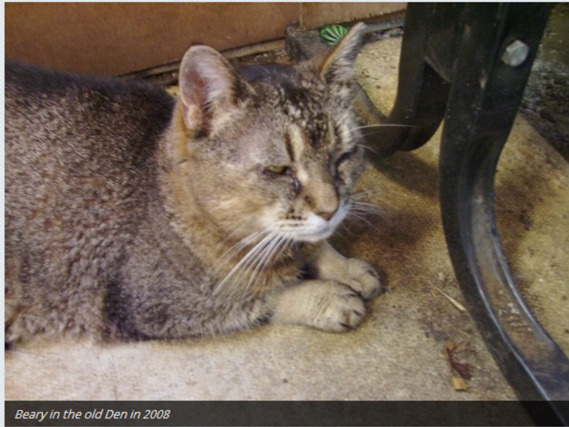 How she got here: We had recently lost Tigger-Lou , but by chance saw an advert posted up on the board in Pets At Home – We collected her that day!  [stray wandering around Swindon's gardens!]

Why she is with us: She had been straying in a residents garden in Swindon – they had found her sleeping in the bottom of their plastic zip up “greenhouse” and would of kept her except for their small kitten did NOT want a competitor for Human time!

Medical Issues: She had apparent eye trauma when we received her , along with leg damage (not visable but she could barely walk or jump).  She was later diagnosed with Rhinotracheitis and along the way other things became apparent. Calicivirus was only finally diagnosed (although we had been prompting this for many years) the day before she was PTS. The vets unfairly blamed us for her lack of care (how little did they know). She also suffered with Renal Failure , Was allergic to most foods and was suseptible to heat problems (liked to sit in a big tub of water to cool off – really!)

Day to day attitude: She was sometimes shy and “back away” ish depending on how gunked up her eyes were and her sneezing. We felt bad for her as it was clear she was under the impression she would be punished for getting us gunked up if she sneezed on us – REALLY BOU!? I developed a saying or few along the route with beary – my favourite being “Im the kind of Mamma who wears her best clothes out to see to the cats – Do i really look like i care about a little Cat Snot and Eye Boogers?!”
Aside from that – she was always looking for affection , “If you sit – Bou will come” ….and give you a dead leg / arm! she liked to lick your top and rub her ears against you as her way of showing affection towards us.

Abilities: She was very vocal and very smart – she could do things that surprised even us (including opening springlocked doors with one paw and picking the right coloured toy / shaped item if you played brain games with her)

Special Needs: She needed daily eye cleaning but didnt like that too much – also she had a fur issue as she was an unknown breed with very long matty fur . She would have a shampoo and brush down regularly. She required L-Lysine tablets every couple days with wet food to aid her Rhino-T.

Breed Detail: Felis Chaus Hybrid as discovered by doing research into her heritage , markings , distinguishing features and characteristics (plus size etc) and help from people online with breed knowledge

Beary Passed on November 10th 2011 after being suddenly overcome with weakness , lethargy and refusing to eat for one day – she was withdrawn and couldnt even sit up let alone stand – due to the shock of its sudden happening we rushed her to the vets which we dont usually do (we have found better care in home remedies which give the cats a calmer and loving rest and recovery experience), we were unfairly judged by our local vet who wouldnt believe it was literally overnight her condition had come to this – they ridiculed our capabilities and methods, even to the point where they refused to allow her even to come home for her final hours when we were pressured into having her PTS – when we finally insisted we wanted her body back to bury her ourselves , we were met with horrid comments which as you can imagine are unthinkable at any time let alone when your daughter has just been PTS.  It has been almost 2 years since bear died – Sox went not long after her which breaks my heart in more ways than imaginable however they kept eachother fighting strong side by side for over 5 years – for this i am thankful . And am honoured to have shared my life with these beautiful inteligent furbabies. Everything i do from now til the end of my cat caring days , will be in memory of not only Sox and Beary but Tigger-lou , for whom the whole history of Craft-E-Kittens wouldnt of been possible without.